Part I   : Ubuntu install and setting up IpFire
Part II  : Setting up ZFS
Part III : Setting up hardware monitoring and webmin
-->Part IV: How much space do you lose with a RaidZ1/RaidZ2/RaidZ3? (this post)<--
Part V : Poor man's deduplication


How much space do you lose with a RaidZ1/RaidZ2/RaidZ3?

Why space is lost

How much space do I lose for a 7 disk RaidZ2?

How much space is available on 9 disks of 4TB in RaidZ1?

The idea behind any RAID is to introduce redundancy (Redundant Array of Inexpensive Disks), this is also why some argue that a RAID-0 is no actual raid (hence the 0). Having redundancy by definition means that one loses net space. This can be a lot (half as in RAID-1) or relatively little (1/nth of the disks space with N disks as in RaidZ1) but space is always lost.

However, in the case of ZFS RaidZ arrays more space is lost than just this traditional disk overhead. This is also why traditional RAID calculators are commonly overestimating the amount of available space in a ZFS array.

ZFS uses a variable block size and by default it can be < 128 Kb and is 128 Kb max. So any file > 128 Kb is split in blocks of 128 Kb which are distributed over the (data) disks evenly. So when we have an array of 4 disks this means 32 Kb per disk. This is a nice round number. When we have a different number of drives (e.g. 7) it's a more ugly number (18.29 Kb) and then usually this means that the hard drive loses more sectors than strictly needed (see below) as it can not write half sectors.  Now this means that ZFS can disappoint when a non optimal number of drives is placed in a RaidZx array.


Traditionally hard drives used to have 512 (2^9) byte sector sizes. Hard drives can only write full sectors (being either written with data or empty). This means that any file (even tiny files) occupies a multitude of 512 bytes, and a multitude of sectors. However, with larger drives being introduced (with more dense platters) this was leading to problems requiring better error correction. This problem was solved by the introduction of 4096 (2^12) byte sector sizes (8 times the earlier sector size). The 4k sector sizes are known as advanced format drives. A large number (but not all!!) drives with advanced format can also emulate 512 bit sector sizes.

ZFS can deal with both by setting the property ashift upon pool creation.

Note that ashift cannot be changed later and requires the pool to be destroyed if you want to change it so think carefully before placing data on your pool!

It is expected that next generation drives will not be able to emulate 512 byte sectors, so these drives cannot be added to a pool created with ashift = 9!

How I simulated the lost space

A lot of people have done a lot of work on how to accurately calculate this, but it's difficult to get it right. So I figured I would simulate this (more or less accurately). I set up a virtual machine in virtual box and created 20 hard disk files of 4 gigabytes the way HDD manufacturers calculate this (4,000,000,000 bytes, so approximately 4 manufacturer's GB's (i'll call them mGB) ). Using my virtual machine I created all possible RaidZx arrays using 3 (RaidZ1) and 20 drives (RaidZ1 / Z2 / Z3). Afterwards I used 'zpool list' and 'zfs list' to view the net space available. I expect these results to translate directly to arrays constructed with 4TB drives as sold by manufacturers (or 2TB (50%), 1 TB (25%)).

So basically I created and destroyed 108 zfs pools in a virtual machine. 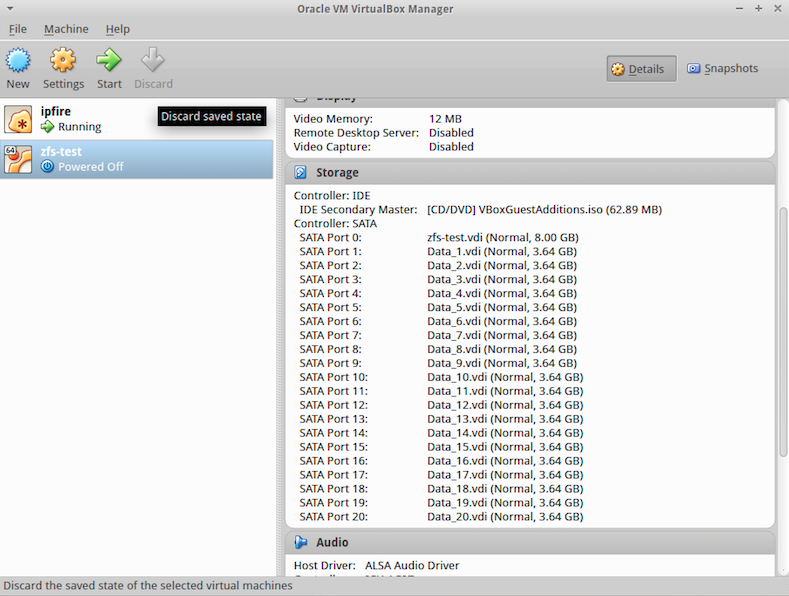 This was a lot of fun, see screenshot below 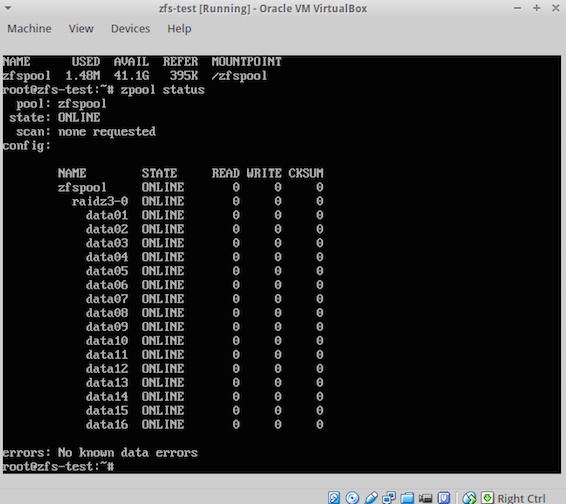 Another way of looking at the data is to see what fraction of the last disk you added is actually used. So, ideally if you have 3 disks (again 3.64 TB) the capacity is 10.92 TB and this goes up to 14.56 if you add a 4th. However this is not always the case.

Table 2 fraction of space from last added drive actually used.
So the worst case is a 5 data disk RaidZ3, the 5th disk is only used for 52%! Again using 512 byte sector sizes is more efficient.

So please use this as a look up post to figure out how many drives you want to place in your array. The last thing noteworthy is that it always pays off to add more drives (an array with more drives is always larger, just sometimes not so much).

I had a lot of fun doing this , also experimenting with more exotic pool configurations just to see how it's done. 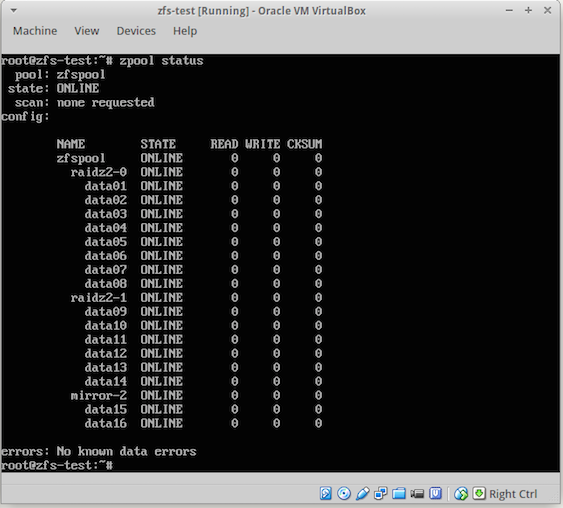 I received some feedback that ZFS list only provides an estimate and hence might be erroneous. So I choose to test some selected configurations (4, 7, 8, 15 datadisks 4k sector in Z1 , Z2, and Z3). I used dd to fill a created dataset on the volume with data from /dev/zero using blocks of 1M.