Bring back smoking in pubs and bars (why?-how?)

Let me start with saying I am not a smoker, yet I find myself frustrated about the recent turn of events. Over the last few years smoking in pubs has been banned. The rationale was that smoking, contrary to drinking, is a habit which directly adversely effects others around you (second hand smoke). As such legislation has been put into place to limit smoking to a defined area ('smoking room' or 'rokersruimte') so that those actively smoking would not harm others around them..

This is a perfect example of a politician's naive solution to a problem.

Some problems:
1 -small bars do not have the space / fund to create a smoking room
-> smokers are forced to smoke outside in front of the bar
-> complaints due to clouds os smoke in front of bars (e.g. in good weather if the sun shines)
-> larger bars have a state supported competitive advantage over smaller bars
2 -smokers like to smoke a cigarette and drink a beer next to it
-> people move to the smoking room permanently
-> the smoking room becomes overcrowded and a fire hazard
3 -smoking bar owners are not allowed to smoke a cigarette in their own bar 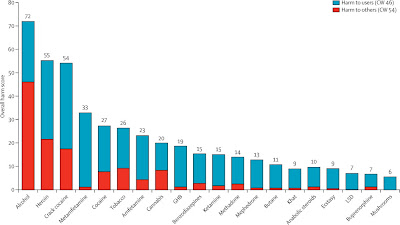 Note how the most harmfull drug is legal whereas a drug causing less harm (both absolute and relative) to others is banned...


So I guess we can say this is certainly untrue...

2 - Second hand smoke is harmful for kids
-> Again, this might be true, but we have scientific evidence that what these same kids are doing in this bar (i.e. drinking, might even be worse...)
-> There is a reason there is a minimal drinking age, if people are old enough to vote, drive a car and get married  they are old enough to decide what they do with their bodies (as they do in the former 3).... So this is a non-argument in my view..


3 - Second hand smoke is bad for pregnant women
-> True, but one can argue about the positive effects that drinking and staying up late have on pregnant women
-> Moreover these women are likely much more comfortable at home than in a sleazy bar
-> People can choose not to go to a smoker's bar...


And this is where the debate becomes interesting. There is nothing stopping people from setting up a non-smoking bar.This would give people a choice in the way they want to damage their health (which in the end is of interest to the state as it generates revenue).

My own (naive) solution to the problem:
Why not force bars to have smoking permit. When present people are allowed to smoke in a bar, when not present they are not. This is very similar to a liquor license and makes the option of having a non-smoking bar a little more interesting than it is..(cheaper liquor in non smoking bars)! Moreover, people can see from the outside weather or not it is a smoking bar if you force owners to put up a sign. It would also solve the problems of people smoking outside, the absence of room for a smoking area, would allow bar owners who choose this to smoke in their bars, etc. And it would provide governments with another source of income.

Most importantly it would give people a choice... Perhaps I (and by this I mean we, i.e. me and others as I live in the UK not NL atm) need to set up some sort of platform to push this legislation. After all the current problems are very similar to those that led to the introduction of liquor licenses in the first place in the 1800s...